Today, Andrea says she feels “in control.” It’s a dramatic change from the decades when Chronic Migraine ruled her days. The active wife, mom and health writer credits a breakthrough therapy.

On a typical day, Andrea Pesate Belozercovsky can be found either keeping up with her two children, Alan and Alexandra, writing articles about her personal health journey, or going out with her husband, Carlos, and their friends. And the 34-year-old from Miami, FL, couldn’t be more grateful for her busy days and nights — it’s a dramatic departure from the last 20 years, most of which were ruled by Chronic Migraine.

Her first memories of dealing with near constant head pain go back to her mid-teens. Her doctor diagnosed her with migraines, but the only preventive options at the time were prescription drugs designed for other illnesses. “One med was for epilepsy and another one was for cardiovascular issues — and the side effects from them were terrible,” recalls Andrea. A few of the adverse reactions included numbness in her face and hands, dry mouth, body tremors, thyroid complications and hair loss. “I felt that the side effects outweighed the benefits, so when I was in my mid-20s, I decided to stop taking them.”

“I couldn’t function for days”
Over the next eight years, Andrea gave birth to two children, and when the migraines hit, she’d try her best to manage them with rescue medications. But as the years went on, the migraines came on stronger and more frequently. “My menstrual migraines were the worst — I’d need to be in bed with no lights, no sounds, not even my kids’ voices. I couldn’t function for days.” Luckily, her parents lived nearby, and they helped out with the children.

It wasn’t uncommon for her to suddenly head home due to a migraine (“Then I’d need to rest for two hours”) or to avoid fun activities with the kids since the conditions would be “too hot” or “too loud.” “The migraines really limited my family’s life,” she admits.

Then in 2015, when she and Carlos moved the family to Miami — and away from her parents—she renewed her efforts to find lasting migraine relief.

“I resigned myself to living as best I could with the pain!”
Working with a neurologist, she tried new prescription meds, which brought on new side effects. “I felt like I was drugged,” says Andrea. She was so “off” that she was involved in a small car accident. “The crash was upsetting, but nothing compared to not being able to speak,” she continues. “I couldn’t put words together, so I stopped taking meds — again.”

Now suffering from daily migraines (at a pain level between six and eight out of 10), in early 2018 Andrea underwent a seven-hour migraine surgery that involved surgical decompression of the sensory nerves in the head and neck known to trigger migraine. Unfortunately, it offered minimal relief. Despite the poor outcome, Andrea says, “I decided I had a choice — to be depressed or to be positive. So I chose to be happy, to continue taking OTC meds and drinking caffeine, and to try to function as best I could.”

“Now I feel almost cured!”
Andrea’s hopes rose when she read about a new FDA-approved medication designed to prevent migraine. It works by blocking the pathway of the CGRP (calcitonin gene-related peptide) receptor, which has been shown to play a significant role in migraines. She called her doctor immediately and said she wanted to give it a try.

Andrea experienced some improvements during the first two months. “When you suddenly go three days without a migraine, your expectations become more real,” she adds. After the third month, her health drastically improved.

“It’s been life-changing — I feel almost cured!” she says. “I’m down to four or five migraines a month that are much less intense and can be treated with acetaminophen. If someone would have told me six months ago that I’d be able to have the TV on during a migraine, I would have laughed!”

“I can be there for my kids”
Andrea wants other migraine sufferers to know hope exists. “What I love the most today is being able to take care of my children and to be present in every moment,” she concludes. “My son used to say to me, ‘Mommy, you always need to go to bed and I can’t talk to you.’ But now my kids won’t always have these memories of me — and that’s the most rewarding.” 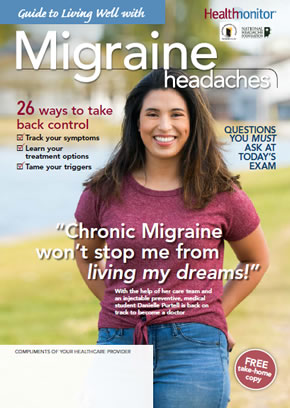